I've got so behind with book reviews that I'm here reviewing a book I read in July last year. It's partly because of an intensive autumn / winter (teaching) and then spring (LibDemmery), but it's also because I got a bit stuck on this particular review, wanting to articulate complex things about the presentation of narrative raised by the stories but just always being too tired every time I opened the file. I still don't think I've done it particularly crisply, but I'll settle for getting at least something posted at this stage. 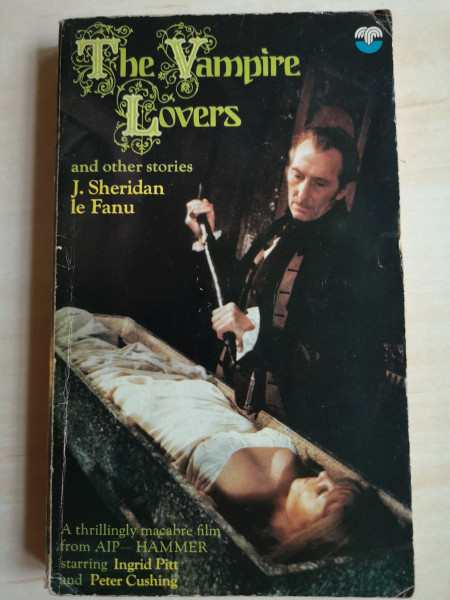 The book in question is a rather random collection of J. Sheridan Le Fanu stories published to tie in with the release of Hammer's The Vampire Lovers in 1970. I bought it probably some time between the ages of about 10 and 14, when I used to comb through baskets of books labelled '10p each' on the floor in charity shops and a farm shop which my Mum often took us to, pulling out anything which looked Gothic horror-related. I recognised Peter Cushing on the cover of this one and knew it should be promising, though I hadn't seen The Vampire Lovers at the time. I remember reading Carmilla back then, and I suppose I read the rest of the stories too, but having forgotten all about them it seemed like time for a re-read. That said, I actually skipped Carmilla itself this time, as I read it on its own relatively recently after going to a theatrical production of it (LJ / DW). So I focused primarily on the other stories this time.

It got me thinking about how stories of the supernatural are framed, especially since Le Fanu's practice here is so very recognisable in M.R. James and Bram Stoker. Here is what we have for the stories in this collection:I think this range reflects some interesting things about how stories of the supernatural work, which Le Fanu was very much aware of and enjoyed playing around with. Apart from 'Carmilla' and 'An Account...', all are explicitly presented as coming from a source at least one remove away from the narrator, who is either repeating an oral tale at second hand or presenting a written version through documents. Indeed, as I've noted above, even though 'An Account...' is a first-person narrative, it presents itself self-consciously as a narrative, via the title (not just 'Some Strange Disturbances' but an account of them) and the comment about whether it really works in written rather than oral form. So Le Fanu is regularly flagging up the nature of his stories as stories: we aren't just being told them, but being told that we're being told them.

It seems to be connected with the suspension of disbelief, which is more vexed for tales of the supernatural than it is for straightforwardly realistic genres (romance, crime, warfare) or overtly unrealistic ones (myth, fantasy). The reader or listener needn't believe in the absolute truth of a supernatural yarn to enjoy it, but they do need to be immersed in its internal logic while they are reading / listening in order to feel the thrill of the tension and terror experienced by the characters. Certainly, Le Fanu regularly returns to the question of the veracity of his own narratives via the medium of his framing devices. In 'Schalken...', for example, we get this:

I had only to request Vandael to tell the story of the painting in order to be gratified; and thus it is that I am enabled to submit to you a faithful recital of what I heard myself, leaving you to reject or to allow the evidence upon which the truth of the tradition depends, with this one assurance, that Schalken was an honest, blunt Dutchman, and, I believe, wholly incapable of committing a flight of imagination; and further, that Vandael, from whom I heard the story, appeared firmly convinced of its truth.

There, he's using the opportunity afforded by the device of telling us he's telling us a tale to claim at the same time that this particular tale is true. But even while insisting on its veracity, he gives the reader permission "to reject or to allow the evidence", and elsewhere he provides even more room for ambiguity. This is particularly true of 'The Fortunes of Sir Robert Ardagh', in which the narrator presents two different versions of the same story. Overall, he insists on the truth of the second, 'eye-witness' version, pointing out that it must be the origin of the first, which exaggerated it and blended it with events from other generations of the family. Indeed, the tale concludes: "The events which I have recorded are not imaginary. They are FACTS; and there lives one whose authority none would venture to question, who could vindicate the accuracy of every statement which I have set down, and that, too, with all the circumstantiality of an eye-witness." But he also raises questions about the 'eye-witness' version by presenting an alternative version at all, by pointing out that the two are irreconcilable, and by comparing the limitations of both: "it is hard to say whether the events which I am about to record appear more strange or improbable as seen through the distorting medium of tradition, or in the appalling dimness of uncertainty which surrounds the reality."

So alongside the assertions that these stories are TRUE, we find a reminder of the fallibility of narrative sources. But I think that plays to the same end of easing the reader into the suspension of disbelief in a way. It unsettles our faith in any form of absolute narrative truth, but in a strange way that also gives us permission to try out believing the account we've been presented with. After all, if there is no such thing as absolute truth, we can put that question aside and see how taking the story on its own terms might feel. I think the device of presenting a story through documents works to the same dual purpose, too. I often hear people saying that the way Stoker's Dracula and many of M.R. James' stories are presented as collections of documents relating the events lends them authenticity and realism. But it also raises doubts about veracity by introducing scope for unreliable narration and acting as a distancing device between the framing narrative voice (if there is one) or the implicit editor of the documents (if not) and the story being related. The persona of M.R. James rarely tells you that a ghost crawled out of the village pond. He just tells you that he's found a collection of documents saying that a ghost crawled out of the village pond.

Telling stories at a remove also relates to the tradition of winter fireside tales, which Le Fanu was clearly well aware of and uses as part of his own framing. They're mentioned explicitly in the opening paragraphs of two stories in this collection:

I'm sure she believed every word she related, for old Sally was veracious. But all this was worth just so much as such talk commonly is—marvels, fabulae, what our ancestors called winter's tales—which gathered details from every narrator and dilated in the act of narration. ('Narrative of the Ghost of a Hand')

Told, indeed, as I have sometimes been called upon to tell it, to a circle of intelligent and eager faces, lighted up by a good after-dinner fire on a winter's evening, with a cold wind rising and wailing outside, and all snug and cosy within, it has gone off—though I say it, who should not—indifferent well. ('An Account of Some Strange Disturbances in Aungier Street'.)

Urban myths do the same thing, and for similar reasons. Telling a story which just happened to someone somewhere would lack the vivid realism which comes from being able to claim some personal connection with and witness to it. But the story-teller would also quickly lose credibility if they claimed that every tale they told had happened to them personally. The middle ground of the reported story lends realism but also retains distance, and Le Fanu clearly recognised and appreciated this.

A few final thoughts on 'Green Tea' specifically, which is the best-known story in this collection after 'Carmilla'. This one is framed as a series of letters presented by an explicit editor: the former medical secretary of the protagonist, Dr Martin Hesselius, now deceased. Le Fanu seems to be very aware of the possibilities created here around unreliable narration and the question of the narrator's relationship to and view of Hesselius, and to be making use of them. The introduction spells out that the narrator has edited down the original letters and tried to translate them literally, if not always gracefully, highlighting that the text has come to us through an editor and thus raising questions about how he may have shaped the narrative even as he claims not to have done. Within the story, there are also some editorial asides, for example the medical secretary explaining that he has edited out a "curious - some persons would say mystical" account of the dietary and medical habits of Jennings (the man affected by the green tea of the title). This helps to preserve the mystique around what has caused Jennings' problems and leave room for the reader to imagine them, almost certainly more effectively than if Le Fanu had committed himself to concrete details here.

Hesselius comes across as a bit of a proto-Holmes, recording the observations and deductions which he makes on meeting Jennings for the first time and then surprising the hostess of the evening party at which they met by sharing them with her: all 21 years before Holmes himself first appeared in print. She, of course, confirms from her longer-standing knowledge of Jennings that Hesselius's deductions are all entirely correct. Jennings' haunting is caused not merely by drinking too much green tea (itself standing for dabbling with the orient) but it seems also by his work on the religious metaphysics of the ancients, which he comments to Hesselius is "not good for the Christian mind" and "a degrading fascination". This is a fairly common Christian take on ancient paganism, including the dual sense of degradation and fascination, also identifiable in Dracula. But although the monkey which haunts Jennings is on one level demonic, it struck me as a distinct allegory for real mental health conditions too. It speaks to him not with an ordinary voice, but with what Jennings describes as "like a singing through my head", and which sounds similar to what I understand of the internal voices of OCD or schizophrenia. Indeed, it's possible Le Fanu was writing from personal experience here, since his wife suffered from anxiety and had died of a "hysterical attack" fourteen years before this story was published. Finally, this story includes another reference to a painting by Schalken: Hesselius notes that the tormented face of Jennings in his study as the light fades outside stands out "like a portrait of Schalken's, before its background of darkness". I think it's safe to say Le Fanu was a fan.