In June, for the sake of some exercise and something to do in a COVID-afflicted world, I walked down to Kirkstall to take some photos of the ITV studios there which appear in the 1979 adaptation of M. R. James' Casting the Runes (LJ / DW). I've been waiting ever since for it to snow, so that I could have a go at visiting another of the production locations in the right weather conditions, and on Thursday it did. Sadly, I couldn't go off on a jolly on Thursday itself, or Friday, as I really needed to finish the first draft of the paper I was writing before the weekend. But the snow was still more or less hanging on today, so I decided it was time to get out there.

This time, I visited St. Mary's Street, where the rectory in which Karswell lives is located. I knew that the actual church there was long gone - even in the 1979 production, you can see that it's semi-ruinous, and indeed in some shots you can actually see JCBs etc. on the site, presumably preparing to demolish it. What I didn't know until I got there, though, was that the building used for the rectory itself is actually still there, at the back of the site where the road does a dog-leg. So that was quite an exciting discovery.

My pictures are far from a perfect match for the screenshots from the production itself. The snow conditions would have been much better on Thursday when the snow was falling, as it is in that section of the production. As with my last trip, I also quickly found that neither of the cameras I had with me (my actual digital camera and my phone) could replicate the shots perfectly. In particular, the cameras used on the production obviously had the same kind of long lenses which allow newspaper photographers to make it look like loads of people on a beach are all really close together because the distance between the foreground and background is telescoped. My pictures of the rectory aren't well-matched to the screenshots, because I didn't expect it to be there so didn't take along any reference pictures. Even when I did have reference pictures, I couldn't always match the angles precisely, because there are currently a load of builders' huts immediately to the right of the pedestrian bridge as you look at it which blocked a lot of the views. And there has been a lot of building work across the New York Road (a new road which goes to York, obviously, not a road to New York) from the site since the original production was filmed.

Nonetheless, I had a reason to go out of the house, I got some exercise, and I saw details in my city which I wouldn't have paid any particular attention to otherwise. The pictures follow below, in each case featuring a screenshot from the production first, followed by the best present-day match I could manage. 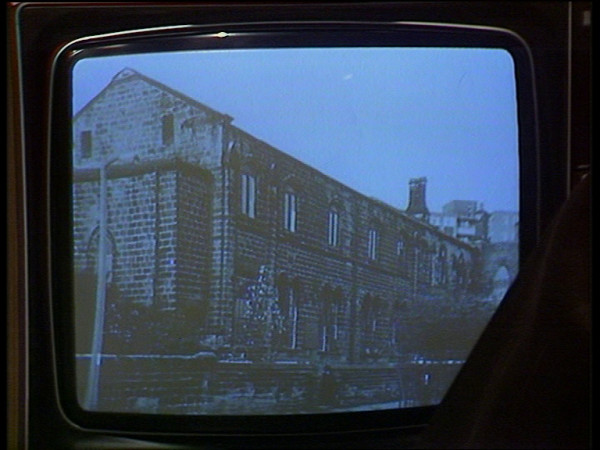 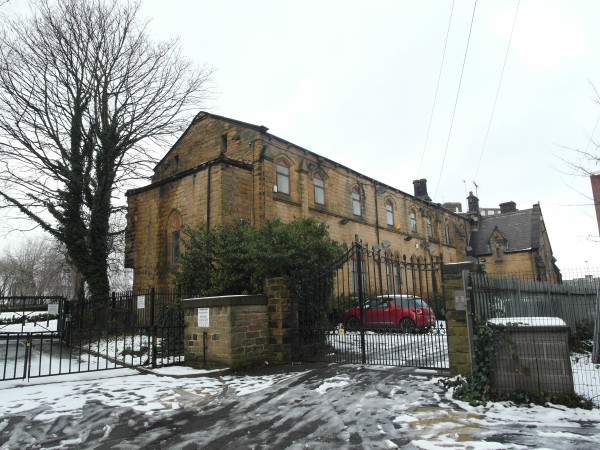 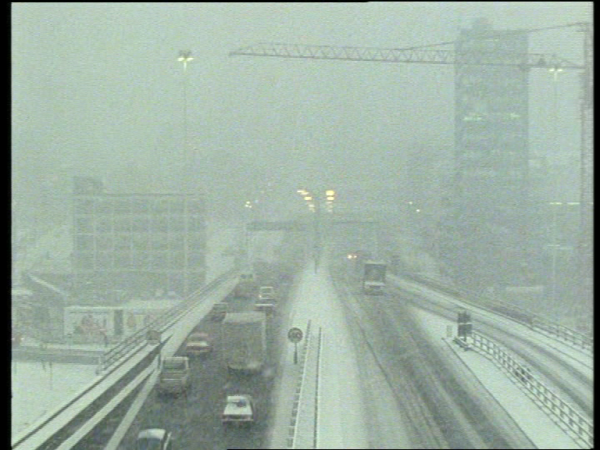 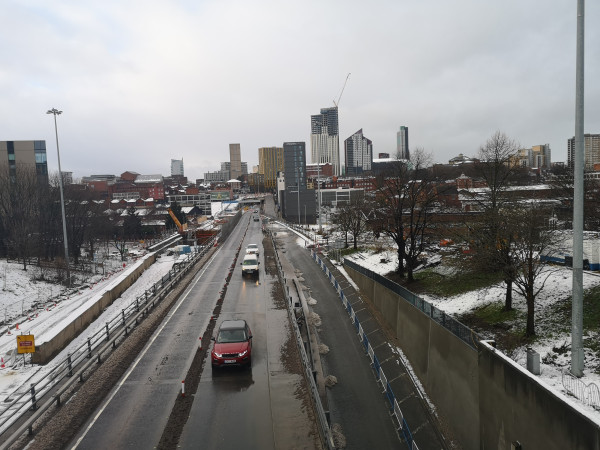 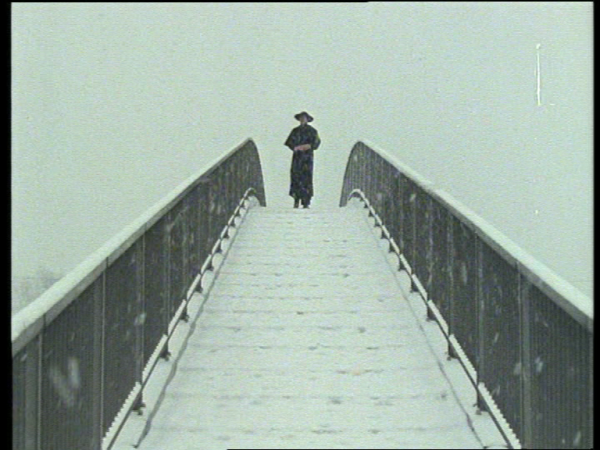 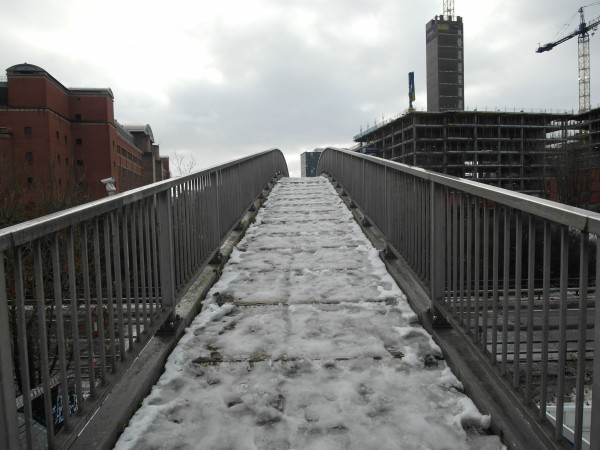 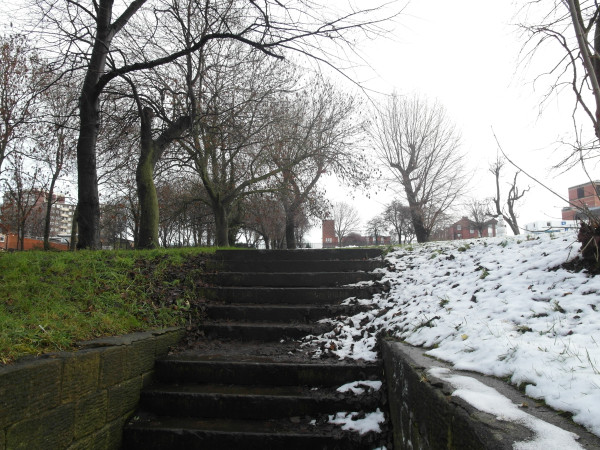 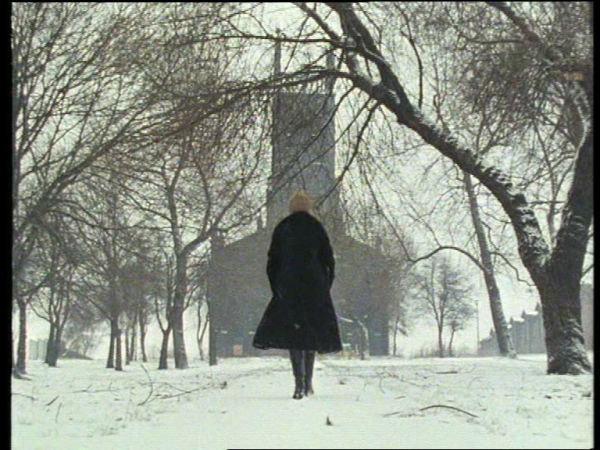 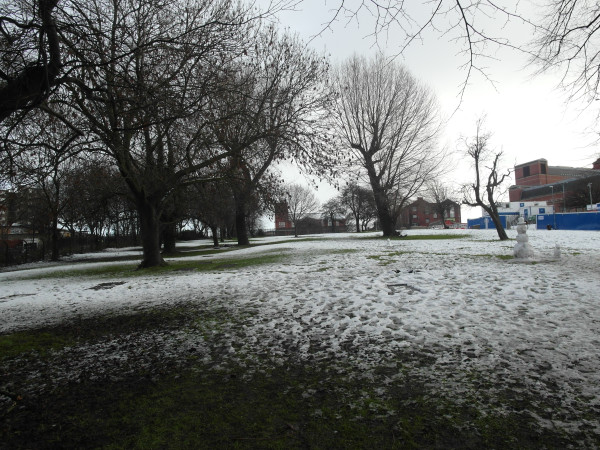 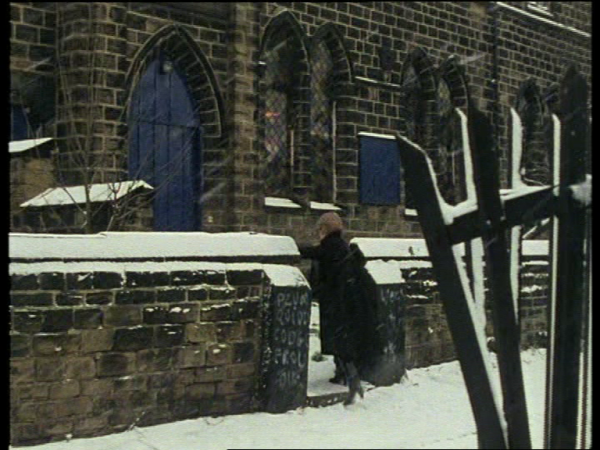 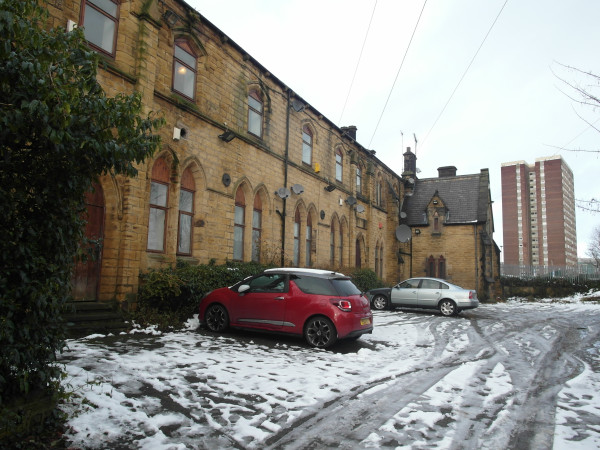 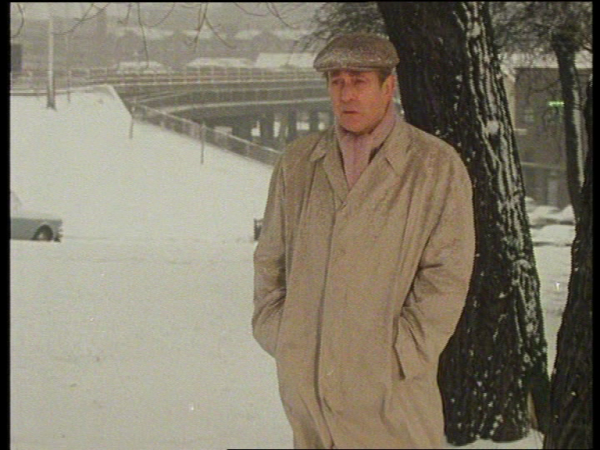 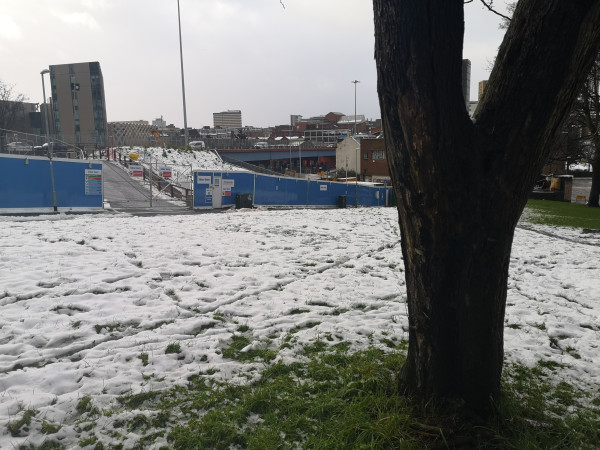 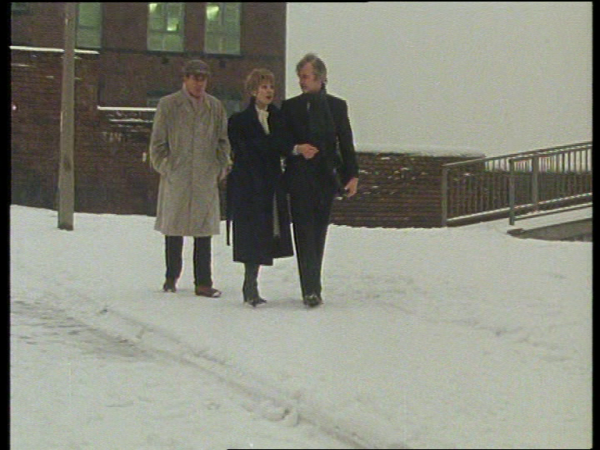 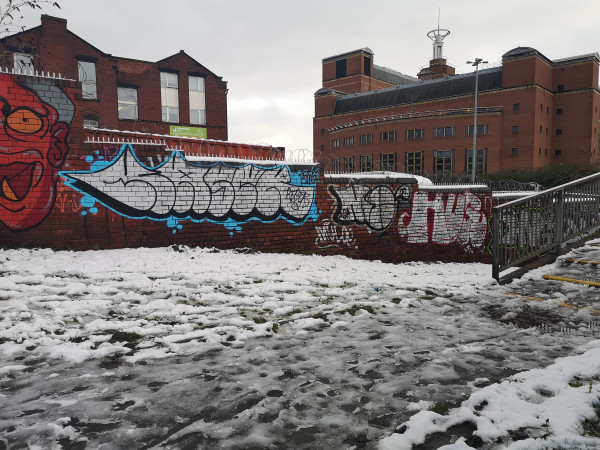 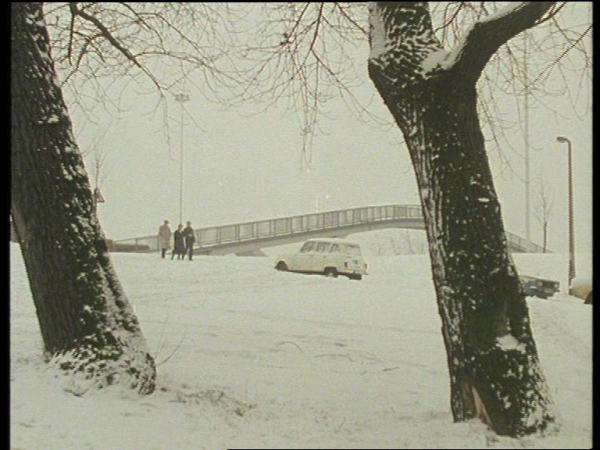 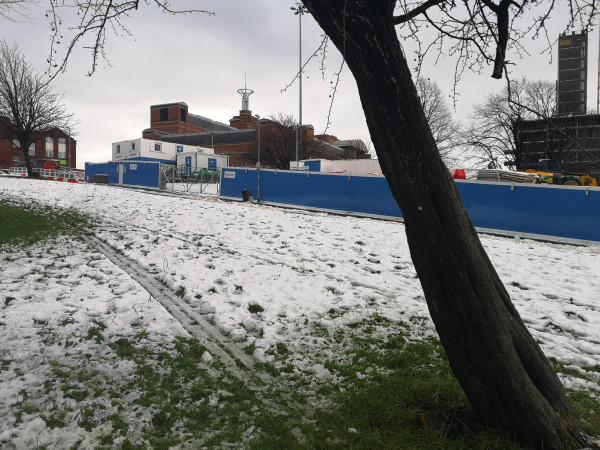 To help put the above in context, here are a couple of general views of the area as it really is now: 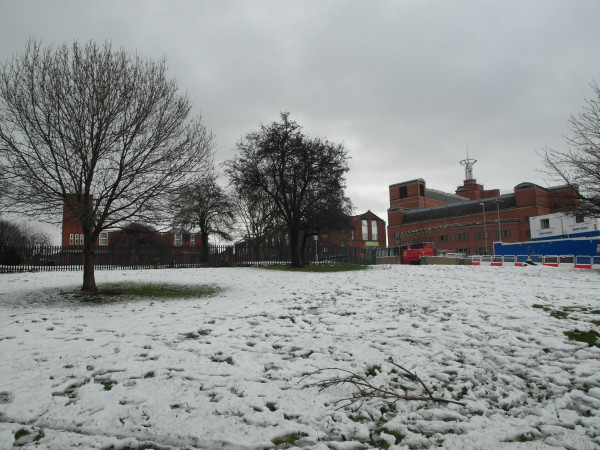 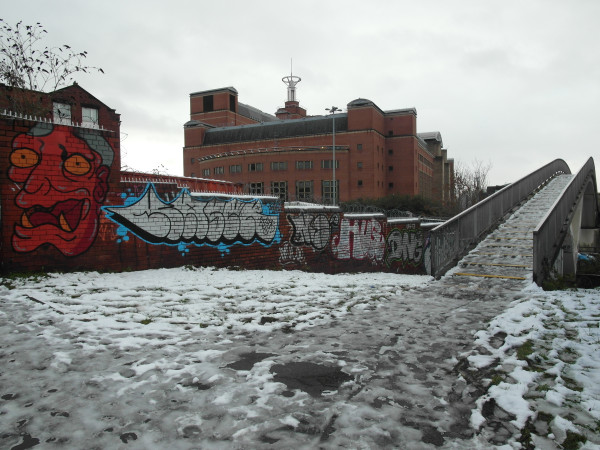 On my way home, I walked past an advertising hoarding at the bottom of Cross Chancellor Street. For those who aren't local, I should explain that the people charged with naming streets in Leeds have for some reason historically been peculiarly unimaginative. Rather than give each street its own individual name, they frequently just take one name (e.g. Harold, Welton, Hessle, Thornville, Estcourt) and simply give a whole batch of streets that name, distinguishing between them via the second part of the name. So you get Harold Terrace, Harold Grove, Harold Avenue, etc. Sometimes, when one street intersects with another, the second one is called 'Cross [first one]', e.g. Chapel Street and Cross Chapel Street. Here, the result has been Cross Chancellor Street, which makes me smile every time I see it.

Anyway, I took a moment to look closely at the adverts pasted up on it, and especially the dates of the events they were advertising. As I had strongly suspected, they turned out to be a bit post-apocalyptic. Not all of them specify a year, because the people who designed them didn't expect them to be up long enough for there to be any ambiguity about that. But they are all for events between February and May 2020, most of which must never have taken place. It's going to take us a long time to come back from this. :-( 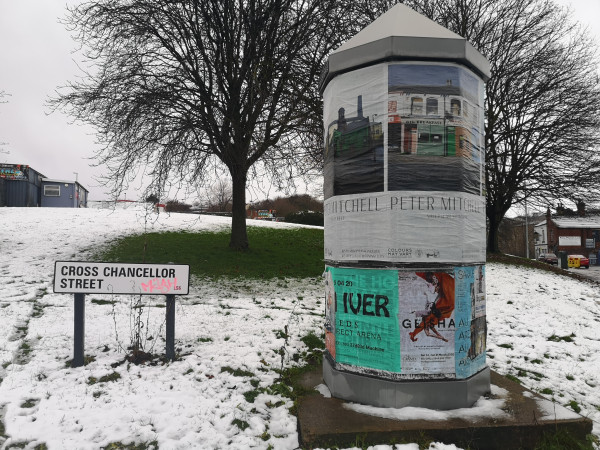 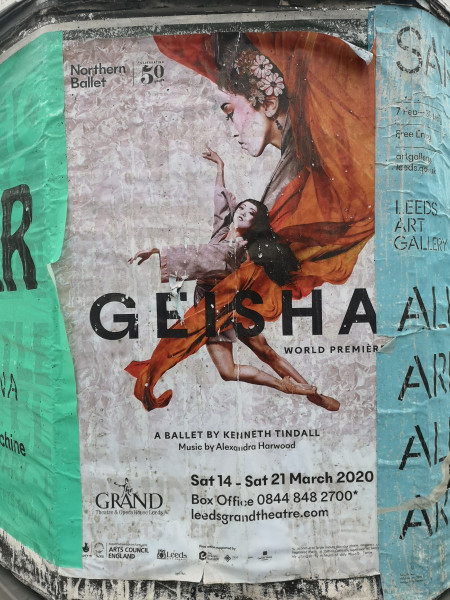 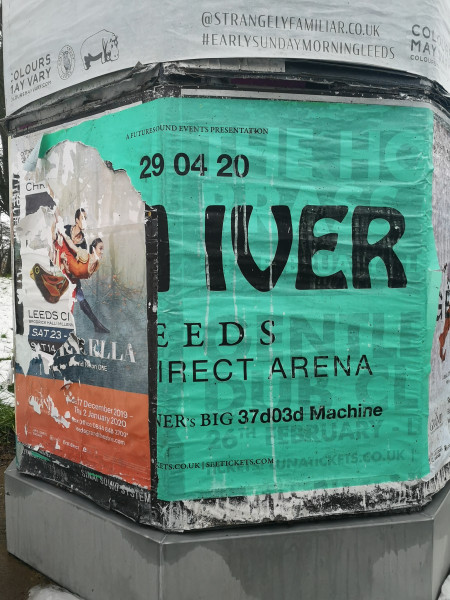 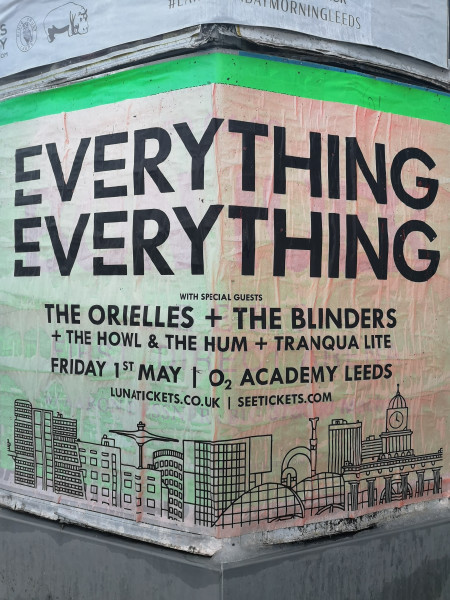 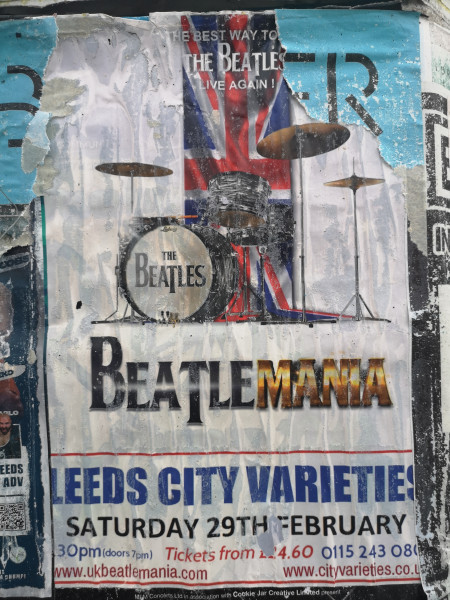