I watched this as a nice treat on the evening of my birthday, because it is one of my favourite of the Hammer Dracula films, and I hadn't seen it for six years. I have reviewed it in these pages twice before: in 2013 (LJ / DW), when I talked about the contrast between the cheerful inn scenes and the dark Gothic threat drawing in on them, Dracula's delicious lurking manipulativeness, and the central conflict between faith and atheism; and in 2014 (LJ / DW) when I discussed the direction and the character of the priest. But I still have more to say about it!

To begin with, it is very nicely structured with a lot of attention to small details. In the opening scenes, when the priest finds Dracula's latest victim suspended inside his church bell, my eye is always drawn to the dusty bottles dotted around the inside of the bell tower, on the ledge behind the victim and on the windowsill. 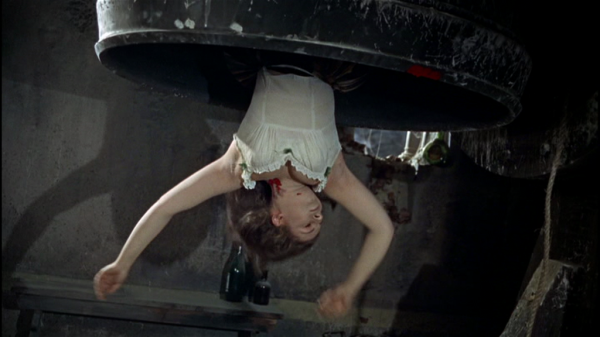 This would be a nice bit of set-dressing in any film, giving a feeling of lived-in realism, but here it specifically prefigures the priest's alcoholism which will be such a major driver of the plot. We can imagine him sitting up here many a time, well before the action of the film begins, secretly indulging. Indeed, it's not even just about the priest. Paul too has his brushes with the dark side of alcohol in this film, first getting beer spilt all over him in a bar-room game, and then downing enough schnapps to end up legless and vulnerable after he has inadvertently insulted Maria's stern uncle.

There are other clever visual comments and echoes which I haven't mentioned before in previous reviews too. Like the streams of blood which we see running, first from the bell to the bell-rope and then from the priest's head-wound to Dracula's mouth; or indeed the similarity between the priest's head-wound (which awakens Dracula) and the one he himself later inflicts on the Monsignor at Dracula's command. There is also a well-selected poster showing the silhouette of a man in a cloak and top hat on a red background next to the door into the Café Johann. Presumably it's a period drinks advertisement, but the silhouetted man resembles Dracula enough to remind us of his looming menace, and it's noticeable that it is given particular screen prominence when Zena is heading out of the door, about to encounter him in the woods.

I have some really great books about Hammer's set design and locations by Peveril Publishing, but frustratingly this particular film doesn't get much coverage from them, despite its careful attention to visual detail. There are some production stills of the roof-top sets in the set design book and (to be fair) a good section on the use of Black Park in the locations book. But what about the church, the village exteriors, the town exteriors, the cafe interiors etc.? I know nothing about how they were designed and built, whether they were re-used from other films (or later re-used themselves), and so much more detail which seems readily available now for most Hammer films. It's an omission.

Meanwhile, even now watching this film for the Nth time, I am somehow still figuring out little details about it. For example, the morning after Dracula bites Zena in the woods, the priest comes into the cafe, and she makes eye contact with him and nods as he comes in. I'd always assumed this simply represented two servants of Dracula recognising each other as such, but I've realised now that it may be conveying a bit more than that. I suspect it's also supposed to reflect some unscreened action during the night, involving Zena helping the priest to install Dracula and his coffin in the bakery cellar after he has bitten her. Certainly, that would help to explain not only how Dracula got there, but also why she is still there in the bakery basement when Paul arrives the next morning and why the priest already knows her and nods to her when he arrives as a customer seeking a room. That is, Zena is not merely a convenient source of blood but also a route into the bakery and thus a safe and convenient hiding-place in the middle of Keinenburg - much as Mina likewise helped smuggle Dracula into the Holmwood's cellar (again off-screen) in the first film. Nonetheless, even Zena doesn't seem to know exactly where Dracula is. When the priest nods to her in the bar to indicate that she has been summoned, she knows to go down into the basement, but he has to gesture to show her exactly where.

I also wondered on this watch whether the priest doesn't actually die at the end. I'd always read him as simply slumping forward with exhaustion before, after the monumental effort of recovering his faith and reciting the Lord's prayer to ensure a final victory over Dracula. But on this watch it seemed to me like a very terminal-looking slump. So I think now that the cost of defeating Dracula for him is his life.

Finally, despite the careful attention to visual details which I've described above, I also picked up a weird mis-match over the question of who knows the Monsignor on this watch. When the priest first arrives at the Café Johann, he says he is in Keinenburg on church business, and asks Paul whether he knows the Monsignor. Paul replies that he knows his niece (Maria) better, which should in turn mean that Paul knows the priest doesn't know the Monsignor personally, and indeed needs help trying to find him. But later, when Paul wants to get a message to Maria, he presses it into the priest's hand asking him to take it to the house of the Monsignor and saying "You must know him". I mean, maybe Paul just has a really strong faith in the priest's ability to have got to know the Monsignor in the intervening couple of days - or maybe Anthony Hinds (the script-writer) had forgotten that if the priest did know the Monsignor, it would be a very new acquaintance and one which Paul himself might have facilitated.

Ah well, it's a small slip in a film I will always love and want to revisit.