This is another Hammer film, this time a straightforward murder mystery. I wanted to watch it primarily because Bernard Robinson's set designs for Dracula's castle in the 1958 film, as made available in Peveril Publishing's book Hammer's Grand Designs, show that one of the windows in the main hall set (also reconfigured as the library) was taken from The Snorkel. This is the set design in question (in full and then closer up to show the label), as well as the window itself, as shown after being reconfigured into the library set complete with stained glass designs of people in chains and bones. 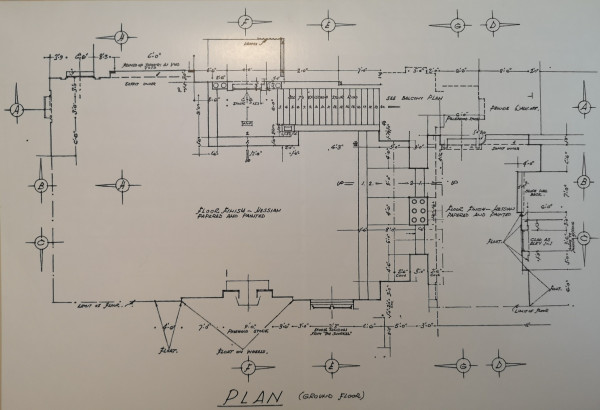 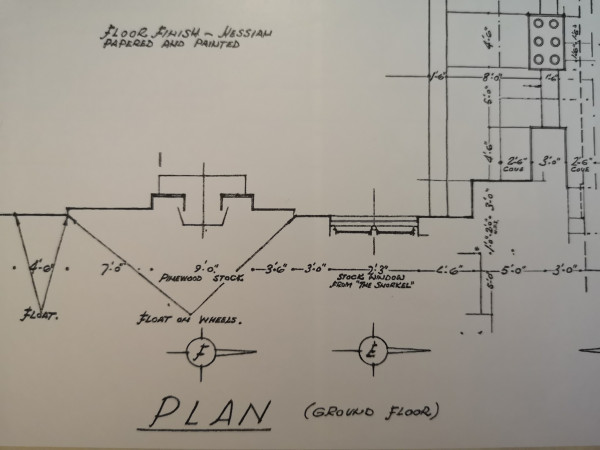 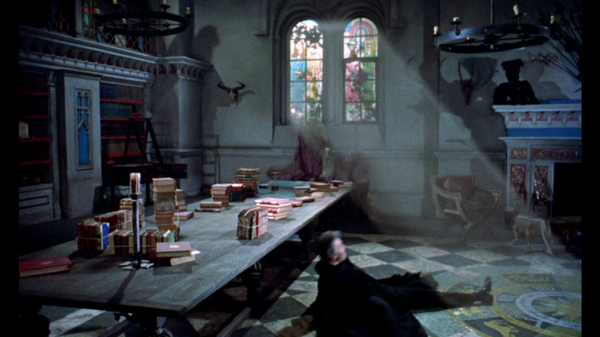 Even purely on a Dracula set design geekery level, the watch very much paid off. I did it as a synchro-watch with

lady_lugosi1313, who is as much of a Hammer geek as me, and between us we quickly realised that far more than the window had been reused. The film includes substantial scenes set inside an Italian villa, where the murder around which the main plot revolves takes place, and almost everything within this villa had either already appeared in The Curse of Frankenstein (1957) and / or was about to do so in Dracula (1958). We recognised not only the window but all of the doors, the fireplace and much of the furniture.

But The Snorkel had much more to offer beyond set design details. I am not going to try to claim it is revolutionary or a work of high cinematic art, but it is a really nicely plotted and paced murder mystery which achieves plenty of tension and atmosphere including one scene which genuinely made us both jump. It was also shot on a pretty high budget for Hammer in this era (£100,000), using it to deliver on-location Italian settings for all of the exterior footage, lovely late 1950s dresses, and excellent lighting and cinematography by Jack Asher which brought everything off to good effect. Even its day-for-night footage was easily forgivable in the black and white medium, while there was some lovely atmospheric use of creepy statuary looming in a darkened villa garden.

Probably the film's biggest flaw is Mandy Miller, then fourteen years old, playing the role of Candy (short for Candace) Brown. Candy is central to the plot, since we see her step-father murdering her mother in a manner designed to look like suicide in the opening scenes, but she is the only one who suspects foul play. We also learn over the course of the film that this is largely because she already saw him drowning her father some years earlier, while he meanwhile goes on to kill Candy's dog and attempt to kill her. This means she has a lot of trauma, frustration and fear to convey in the film, both in response to these terrible events and in response to none of the adults around her believing her when she tries to tell them what is going on. Unfortunately, her acting skills weren't really up to this, so that she either under- or over-reacted to almost everything, rather undermining the story. We agreed early on that she needed a metaphorical slap, and also noted that Hammer being Hammer, she might well literally get one. Indeed, much later, she did.

This was all rather a pity, as the character of Candy and her narrative arc throughout the film was actually very powerfully thought out. She is not only disbelieved but actively gaslit and pathologised by the adults around her throughout, including her step-father Paul who is busy trying to divert suspicion, but also her governess / companion, the police and the local consul. They all tell her she is being over-dramatic and imaginative, implicitly threatening her with being committed to a 'mental institution' if she doesn't stop saying Paul has murdered her father, mother and dog and is trying to murder her. Ultimately, of course, Paul decides she needs to be silenced altogether, so arranges to murder her in the same manner as her mother - drugging her, sealing her and himself into a locked room, fitting himself with a snorkel connected to tubes allowing him to breathe external air, turning on all the gas and then hiding under the floorboards.

Luckily for her, the police chief and her governess prevent the murder this time by breaking into the room looking for her, but they still believe she was trying to take her own life, and only agree to search the room for Paul in order to 'prove' to her that he isn't there. In the process, they move a heavy cupboard over the trapdoor he has used to get under the floorboards, and then leave it there when they all go, with Candy having admitted that Paul is nowhere to be found. We then see Paul discovering he is trapped, followed by Candy insisting on going back to the room just one more time to double-check Paul isn't there. This time she hears him calling out for help, but in response merely knits her brows and declares, "It's just my imagination".

What's really nice about how this is set up is that as a viewer we can't be sure whether she has finally accepted the message which every adult in the film has been giving her throughout, and really believes this (so that Paul is about to die as a direct result of his contribution to gaslighting and pathologising her), or knows full well that it really is Paul and that he's trapped, and is saying it as a way of mocking him and letting him know that she is damn well going to leave him there to die. Either way, it is a grim and bleak place for the plot to have taken us to, and I would quite have liked the film to end there for that reason. Maybe that wasn't considered acceptable for 1958 audiences, though, as we next see Candy asking her governess and the consul to stop the car as they drive away through the local Italian town, so that she can go into the police station and tell them to go and look under the floorboards in the villa, where they will see that she was right. The police chief reacts by getting up and putting on his hat, so I guess Paul will be rescued after all, but it's still a pretty good ending as Candy's emphasis on the police finding out she was right tells us one more thing about her character - that what she really wanted all along was to be believed, rather than to salve her conscience about Paul.

An honourable mention in all this should go to Toto, Candy's dog, who was played by a very well trained canine actor. Toto is onto Paul from the start, pulling at the carpet above the trap-door where he is hiding when his wife's body is discovered, and then later picking the snorkel mask which he used out of Paul's wardrobe and dropping it at Candy's feet. Sadly, she doesn't catch on, but Paul does, leading to Toto's untimely demise and presumably a listing for this film somewhere on the Does The Dog Die? website. But we enjoyed him while he lasted.