It's the meme of the moment

Last time I travelled abroad: mid-January, to Denmark to speak at a conference on public space in Roman Britain (LJ / DW).

Last time I slept in a hotel: on the same trip to Denmark. It was the Scandic Aarhus City and it was very nice.

Last time I flew in a plane: same trip again! I flew with Scandinavian Airlines (SAS) from Manchester to Aarhus, via Copenhagen on the way there and direct on the way back. They seemed very good and had nice onboard food.

Last time I took a train: would you believe, to and from Manchester airport for the same trip.

Last time I took public transport: Wednesday 11 March. I walked to work that day, precisely to avoid it for coronavirus-related reasons, but caught the bus home as a) it was at a quieter time of day and b) I wanted to go to the supermarket on the way home, and the bus stops right outside it but my walking route takes me a different way.

Last time I had a house guest: New Year's Eve / Day. My friend

kantti and her husband stayed over for dinner, silly games and champagne.

Last time I got my hair cut: er, when I was about 15? Unless you count the occasional very minor trims which I get either my sister or

Last time I went to the movies: mid-November, to see the premiere screening of a film-of-an-opera which my colleague had acted as research consultant for (LJ / DW).

Last time I went to the theatre: 8 March, to see Robert Lloyd Parry doing Lost Hearts and A Warning to the Curious. It was the last weekend when doing that sort of thing seemed OK. He had a full house, actually. I have seen him do A Warning to the Curious before, but not Lost Hearts. It's one of my favourite M.R. James stories, and it was so good!

Last time I went to a concert: hmmm... There may be something I've forgotten, but judging from what I've recorded here there are two potential answers, depending on what you count: 1) live music from an Icelandic band called amiina accompanying a screening of Fantômas in April 2019 (LJ / DW) or 2) a performance of Donizetti's L'Elisir d'Amore when I was in Vienna at a conference with a colleague in September 2014 (LJ / DW).

Last time I went to an art museum: May 2019 during our DracSoc holiday to Germany, when I spent a whole day on the Museum Island in Berlin, split between the Altes Museum, Neues Museum and the Pergamon Museum. Since I never posted any pictures of their holdings here at the time, I will put one up now, though it's hard to choose what since the Altes Museum in particular was so full of amazing stuff. Probably the most exciting, though, was this famous tondo of the emperor Septimius Severus and his family, which is the only such painted ancient imperial portrait to survive: 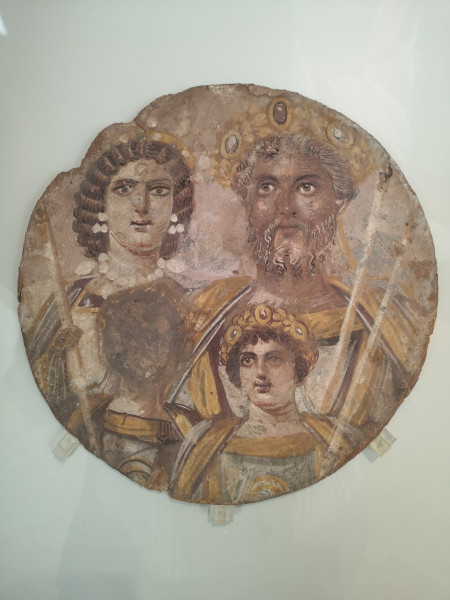 Last time I sat down in a restaurant: 8 March, before the M.R. James performance the same evening, when I met up with

Bavage's Moon Party to mark the fiftieth anniversary of the moon landing.

Last time I played a board game: arguably today, when I played Story Cubes over Skype with Eloise and Christophe. This is a game consisting of nine dice with pictures on each side, which you have to roll and then tell a story based on the nine pictures which come up, and I realised that we could play it remotely if Eloise rolled the dice and I wrote down what she said they showed. It was kind of chaotic, especially when Christophe joined in, but fun and a nice way to get some contact with them. If that game doesn't count because it doesn't strictly have a board, then New Year's Eve when I played Augustus with

I thought filling all that in might make me a bit sad, but actually no - it was a nice way of reliving good memories. Here's to the days when we can do all this stuff without a care once again.