I've got a chum coming round to watch films tomorrow afternoon, so I'd better get on top of my write-up back-log first.

This one was a filmed version of this opera, produced by the Radius Opera company, which I went to see primarily because my colleague Emma Stafford provided the composer with her expertise in Greek mythology when he was writing it, but also because I had heard that the music was very Handelian, which I like, and which turned out to be entirely true. The film was premiered at the University of Leeds, which made it easy for me to go to, and indeed Emma, the young man who had played Hephaestus, the music director and the composer all took part in a Q&A led by one of the academics from the School of Music before the film itself began: 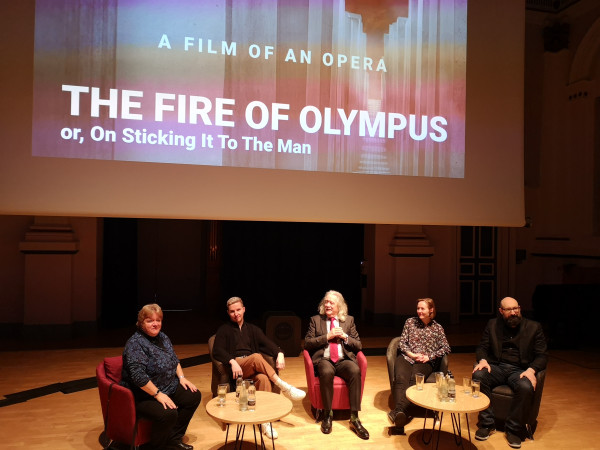 I am not actually 100% sure who the director of the film, as opposed to the opera, was, but Tim Benjamin was the composer, so it seems only fair to credit him in the title of my post. It should be said anyway that the film is far from just a film of an ordinary theatrical performance of an opera. It was fully re-staged and re-shot, with a prelude sequence and cameras moving around the characters in a way you couldn't do when also trying to perform for a theatre audience. Indeed, Emma herself featured in the prelude sequence as a refugee after a disaster hearing stories from a mysterious stranger about what had happened on Olympus a few years ago...

The main story is basically the tale of the brothers Prometheus and Epimetheus, and their rather inept attempts to steal fire from Zeus. They appear early on as quasi-Occupy Wall Street or Extinction Rebellion-style activists who have sneaked into Zeus' palace and are looking for ways to cause chaos. While there, they discover his Fire, kept in a jar - to Zeus, just a pretty toy, but they quickly realise its potential value if taken from him. Before long, however, Prometheus is captured and tortured by Hephaestus, who is basically the head of Olympus' secret police with a Naziesque military coat and knee-high leather boots to match

For me, the most enjoyable character was Zeus. He was a big, bearded thundering baritone, playing an authoritarian leader who understands exactly how to manipulate his people. He had a repeated refrain which articulated this perfectly, basically expressing his pleasure at Prometheus and Epimetheus' activism on the grounds that it will give him an excuse to crack down, which it went like this:

A crisis! An opportunity to demonstrate authority,
To reassure the people, and exercise control.
To talk about community, and praise the role of family,
Be firm, be fair, show strength to the prole.

I went round singing that to myself for several days afterwards. :-)