Two weeks ago, I attended IVFAF, a vampire festival combining an academic conference, a creative congress (i.e. authors talking about their work), a film festival, a number of theatrical performances, a Bram Stoker walk, a cabaret and a ball all into one glorious five-day event. I've been following their activities on Twitter / FB for a while, but their last three events had been in Romania and at times of year when I already had a lot on. This one, though, came to the Highgate area of London, and I decided it was worth devoting a week of summer holiday time to going along.

Back in April, I went to a different two-day conference marking the bicentenary of John Polidori's 'The Vampyre', which also took place in Highgate (though at a different main venue). I never wrote it up here, though I did upload an album of pictures intending to use them as the basis for a never-written entry, mainly of our visit to Highgate cemetery complete with a few screencaps from Taste the Blood of Dracula, which used it as a location. I went along to that conference purely out of interest as a listener, but by the end of it I'd realised that specialists in Gothic literature aren't always in the best position to unpick 'The Vampyre's engagement with Classical antiquity, and indeed that that engagement was considerably deeper and richer than I'd previously realised.

IVFAF 2019 also took the bicentenary of 'The Vampyre' as one of its themes (along with the Highgate Vampire craze and Hammer's vampire films), and I registered for it from my academic email address, which prompted the organiser to ask whether I was planning to offer a paper. Fresh from the recent Polidori conference, I said yes, I probably would, and indeed re-read both Polidori's story and Byron's related Fragment and made some notes on them. But then as the abstract deadline drew closer I looked more soberly at the other tasks I had to do during the same period, and realised that it probably wouldn't actually be a very good idea, so I didn't submit one. I decided I would just go along in the same spirit as I had to the Polidori conference, to enjoy other people's papers and the films, shows, walks and partying around them. Except that then, about three weeks before the conference, I got another slightly plaintive note from the organiser saying that he was holding a slot for me on the programme, and could I send in my abstract? And it turned out I couldn't resist this, so I had yet another look at my calendar, identified three days I could claw out to write the paper after all, and knocked an abstract together. So that is how I turned what was supposed to be a week's holiday into three days of intensive paper preparation followed by travelling down to London and delivering it.

It was fine, though. I had been right in the first place that there was a good paper's worth of things to say about how both Byron and Polidori's stories engaged with Classical antiquity, was able to compile it into a perfectly respectable paper in three days, and indeed managed to identify some quite specific source material for each of them which I don't think has been fully explored before. So it was all in the bag by the end of the Monday, leaving plenty of time for me to relax, travel down to London and settle into my aparthotel on the Tuesday. I even found time that evening (equipped with advice from a few FB friends) to get my nails done in suitably vampiric style in a local nail bar, ready for the week ahead. My paper was scheduled for the first day, which was nice as it meant I could get the worky bit over and done with and then enjoy the rest of the festival. I made sure to attire myself appropriately, and did my thing. 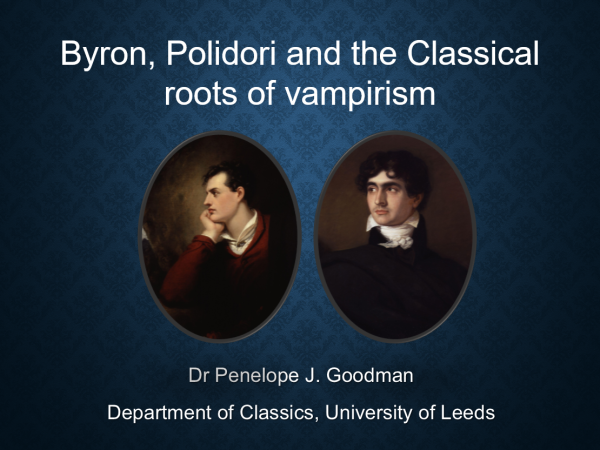 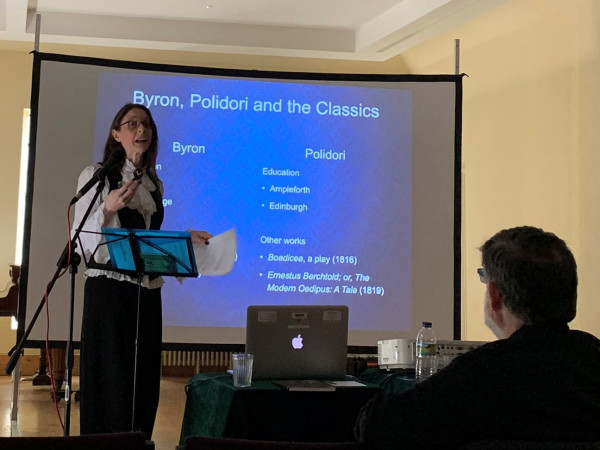 The other papers were good to listen to too, covering various angles on Stoker's Dracula that will be useful for the paper I'm now writing on Classical references in that, as well as all sorts of insights into other vampire stories, films and of course the cultures they reflect. And as with the Polidori conference, I came away with quite a reading / watching list, which is part of the point of going to these things. My personal highlights were Philip Spedding from the London Library talking about his recent findings relating to Stoker's use of the library for his research into Dracula, and Kieran Foster, who has just finished his PhD on the Hammer script archive at De Montfort University Leicester on their unmade Dracula in India films. Pictures of both of them below: 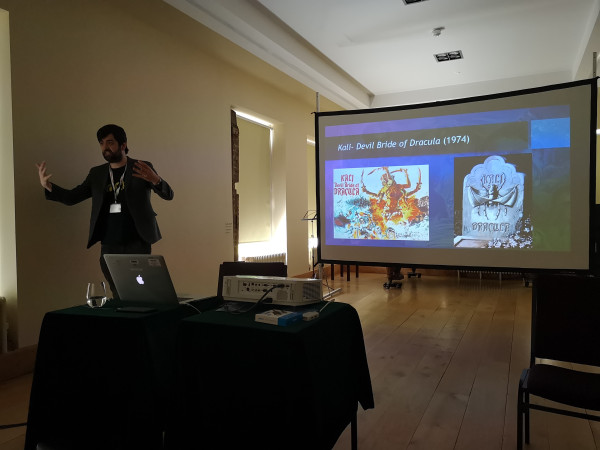 I didn't spend so much time in the creative congress, which was largely scheduled in parallel with the academic conference, but I mean you might as well sit and listen to Kim Newman being interview by Stephen Jones (editor of The Mammoth Book of Vampire Stories in which Kim's first Anno Dracula story appeared) if you've got no other pressing commitments. 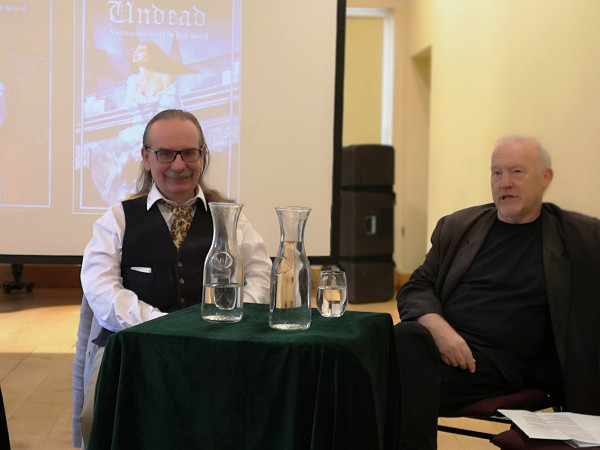 The Bram Stoker walk was another highlight. Beginning at the Lyceum, where Stoker worked as the manager on behalf of Henry Irving for most of his professional life, and ending with a statue in Irving's honour outside the National Portrait Gallery, it covered the literary and theatrical landscape of the streets north of the Strand in Stoker's day. Our guide, Anthony Davis, had developed the walk following the London Library's work on Stoker's research methods, and had strong bibliographic interests himself, so he also whipped out original editions of various relevant publications at appropriate moments, which was quite as exciting as the various buildings and landmarks around us. We all enjoyed it very much - including Anthony, who seemed to like having an audience of Stoker enthusiasts to share his expertise with. 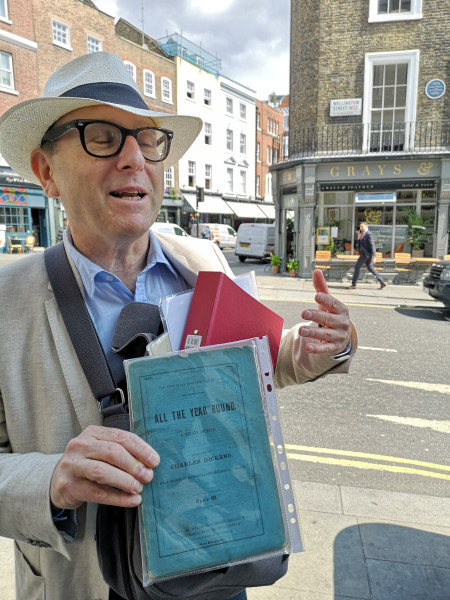 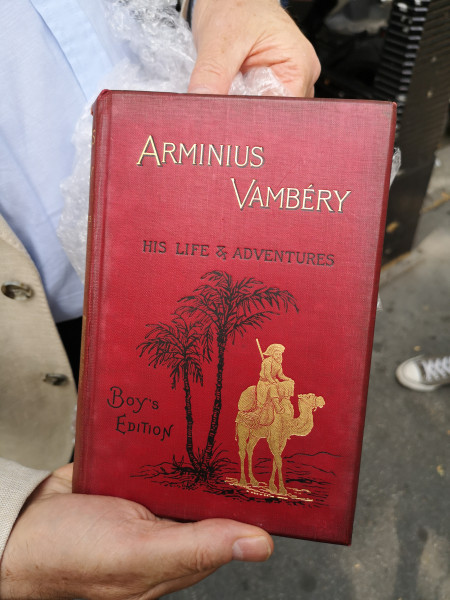 DracSoc chair Julia also attended the academic conference, while additional members Adrian and Pat joined us at various points in the evenings for dinners, shows and films. We saw two productions by the Don't Go In The Cellar theatre company: 'Sherlock Holmes versus The Sussex Vampire' (which also included versions of The Creeping Man and The Devil's Foot) and 'Dracula's Ghost', in which a very pale-faced lawyer named Mr Leech (whose true identity I'm sure you can guess) periodically visits the widowed Mrs Bram Stoker, interspersed with relating the story of his life. The first was done as a one-man show (as are most DGITC productions), with the audience cast as criminals in Sherlock's memory palace, and worked pretty well, but we felt that Sherlock as a character did struggle a bit without other characters to be clever at. The second was an absolute cracker, though. The inclusion of a second actor on stage playing Mrs Stoker probably helped, but it was basically a whirlwind tour through more or less every possible vampire and Dracula-related story you can think of, all incorporated into and referenced within Mr Leech's life story. My favourite moments were a mention of D.D. Denham (Dracula's alias in The Satanic Rites of Dracula) and a scene in which he meets and speaks with Kali - partly because this references one of the very unmade Hammer Dracula films we'd heard Kieran talking about the previous day, but also because it was just done so effectively, by the actor who'd also been playing Mrs Stoker putting masks on both her face and the back of her head, and undulating her arms in a very divine and otherworldly manner.

I didn't make it to any of the new shorts and feature films which were screened during the days, again because of clashes with the academic conference and Stoker walk, but I did get to three evening showings of vampire classics. Thursday night was Hammer Scream Queens night, featuring Caroline Munro, Judy Matheson, Pauline Peart and Madeline Smith (l-r, below) following by a screening of Captain Kronos - Vampire Hunter. Saturday then offered Interview with the Vampire, not only complete with a Q&A afterwards with its producer, Stephen Woolley, but also being screened in the interior of the very cinema which Louis sits in during the film in order to watch a sunrise for the first time since becoming a vampire - the Phoenix in East Finchley. Here's a screencap from the movie, followed by Stephen Woolley starting to answer questions in front of the same screen as the credits rolled - and let me tell you it was quite the immersive viewing experience to suddenly find ourselves sitting as though right alongside Louis in the cinema when we reached that part of the film. 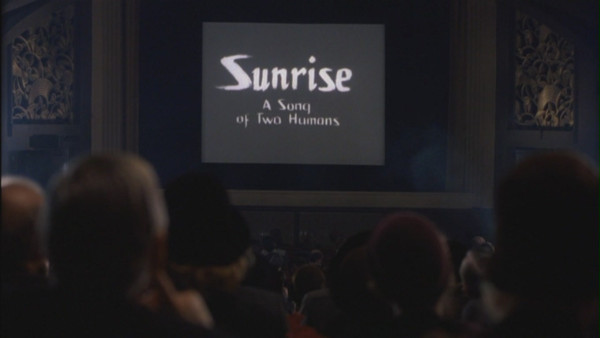 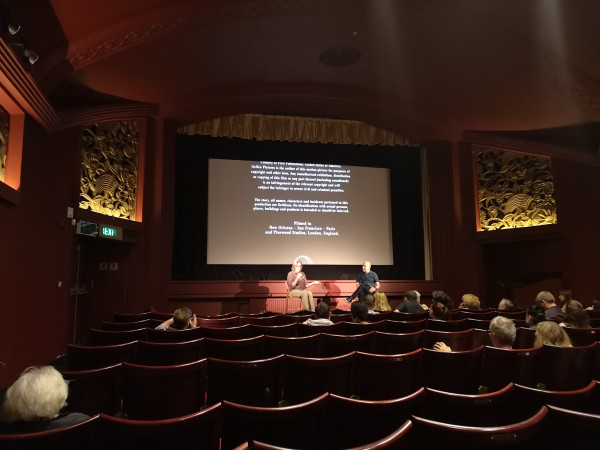 As if that weren't enough, it was followed by a screening of the most recent restored version of Hammer's Dracula, and after four days of intensive vampirising I got so much out of both of those films, despite not particularly thinking of myself as an Interview... fan and having seen Dracula more times than I dare to count. But I shall write both of them up as movies separately, at least once I've cleared the rather extensive backlog waiting ahead of them.

Finally (though not chronologically as it took place on the Friday - but the grand climax of the festival anyway), there was the combined cabaret night and ball at the Birdcage in Camden. So many years since I have gone there for a night out, but it was great to be back in my best Gothic finery. Everyone there had really thrown themselves into the vampire theme, with many a set of fangs to be seen amongst both audience and performers, while the cabaret itself was about as vampy as you could get. Probably my two favourite acts were the guy who came on stage looking perfectly like an ultra-Gothic Nosferatu, but then picked up a 1930s telephone and mimed emotively to breathy version of this tragic love-song - with occasional breakaways for vampiric snarling and rasping - and the young lady who came on stage in the persona of Elizabeth Bathory, removed most of her clothing and proceeded to pour fake blood all over herself out of a bottle. 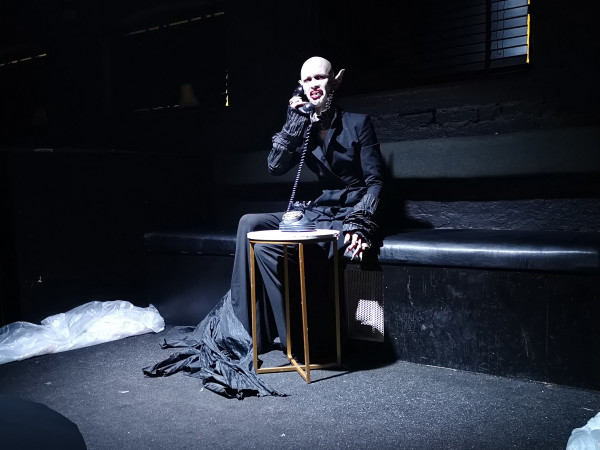 But there was much more besides, and then when they'd finished time to dance to Serious Business Proper Goth Stuff played for us by people with backcombed hair.

Plans are afoot already for next year's IVFAF, quite possibly to be in Santa Cruz with a Lost Boys theme. I'm not sure I'll make that, but having the chance to go this year was definitely a good thing, and now I even have another Classical vampires paper to maybe think about writing up properly some time soon. Dracula first, though...