This is Christopher Lee's first feature film, made when he was on a training contract with Rank (the 'Rank Charm School'), which the ever-wondrous Talking Pictures were kind enough to show some time ago. He has only a small role in it, playing a beautiful young man in a night-club with all of about two lines, but the film as a whole proved to have much more to offer beyond his small appearance (which is far from always the case with Christopher Lee films), and I would highly recommend it. 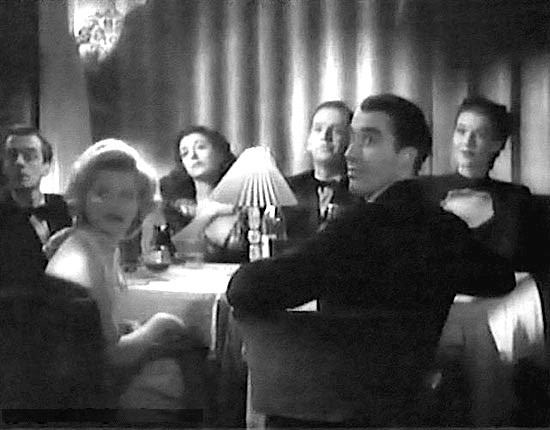 It is set in 1938, i.e. ten years before its release date, but with a framing narrative in the present day which alerts us that a murder has been committed. Ten years earlier, the main story begins in the nightclub where Christopher Lee is one of several louche young things lounging around a table waiting for something to happen - and it is he who has the honour of identifying the lead male character, Paul Mangin (Eric Portman), as a 'Lord Byron' type when he sweeps in imperiously. Mangin is a classic tragic tormented hero who wears cravats, rides around town in a hansom cab and turns out to own a vast faux-Renaissance Venetian palace full of ancient jewellery, fine dresses and the titular corridor of mirrors. That night, he woos society girl Mifanwy Conway (Edana Romney), taking her to his home, introducing her to his fantastical other-world and encouraging her to try on some of the dresses - which she discovers are perfectly tailored to her size.

We gradually learn that he is deeply invested in a fantasy regarding a woman named Venetia who lived in the 15th century, believing himself to be her reincarnated lover and just waiting to find the woman herself - Mifanwy, of course. She becomes embroiled into it all, flattered by the attention and seduced by the fairy-tale setting which he has created, allowing him to turn her into a mannequin draped in Venetia's clothes and a living doll who dances on his command. He keeps taking cigarettes out of her hand, gently but firmly schooling her out of the 20th-century modernism which they represent. Seductive though it all is, she increasingly discovers that she doesn't like the way the whole scenario erodes her sense of will and self-determination, and breaks away from Mangin for the Welsh landowner she really loves - but not before returning for one last night to the faux-Venetian ball which he has put on in her honour. There, he takes her refusing his proposal of marriage very badly, chasing her through the mirrored corridor, and the murder which had been foreshadowed from the start occurs. Returning to 1948, Mangin is now the one who has been transformed into a mannequin - a wax model in the gallery of horrors at Madame Tussaud's.

In some ways the film reminded me strongly of Cocteau's La Belle et la Bête (LJ / DW), released only two years earlier. It has the same basic set-up of a young woman finding herself in an outsider's palace full of wonders, as well as some similar visuals such as flowing drapes around the bed. But it certainly ends up quite differently. I also felt I'd seen some foreshadowings of Hammer's Dracula in it. Mangin's whole demeanour towards and pursuit of Mifanwy is quite in line with Lee's Dracula, as is his identification with the past and the design of his house (opus sectile floors, a hallway with a gallery and staircase, his study complete with the accoutrements of a Renaissance man, stone eagles in the garden). He also transpires to have a house-keeper called Veronica who tells Mifanway that she is a prisoner and that Mangin has consumed her youth and can appear at will, and he even wears a long black cloak at the climactic Venetian ball. But I'm sure these are all really just a matter of a general mid-century consensus on how to portray a Byronic villain and his house rather than any meaningful connection between the two films.