So I got a new phone. My last two have been Samsung Galaxies (first an S4, then an S7), but after I had owned each of them for about two years, the microphone on the first started to fail and the battery on the second went rapidly downhill, so that recently it hasn't been able to make it through a full day without needing a booster charge. Nonetheless, I was familiar with what Samsung had to offer, and liked in particular their high-quality built-in cameras. That meant I did look pretty hard at the S9, and especially the S9+, on which the various extras include a larger battery. But then when I actually logged into EE to check out their upgrade deals, they recommended a Huawei P20 Pro as the closest replacement for the S7 I had, so I looked into it to find out more.

The real clincher for me was the 4000 mAh battery (as compared to 3000 mAh for the Samsung Galaxy S9 or 3500mAh for the S9+). But then it also turned out to have twice as much storage capacity as the S9+, to be available in a very pretty ombre colour called Twilight shading from dark blue to rich purple, and to have one of the best cameras (or actually set of cameras) currently available in a mobile phone. So I have kissed goodbye to Samsung and made the move.

This in fact turned out to mean I was setting up the new Huawei on Thursday evening while listening to news stories about their chief financial officer being arrested for breaking US sanctions on Iran and fears about them using 5G kit they have supplied to spy on western countries. I do wish I had known about any of that before I bought the phone, but it's rather too late now - I already own it, and besides I don't think there is really any such thing as an ethical high-end smartphone.

I've been getting used to it, and setting everything up the way I want it, over the last couple of days. All my contacts and apps transferred over very smoothly via my gmail account, despite the move to different hard-ware, although a lot of the apps have taken the change as permission to switch back on all the annoying notifications which I'd spent ages hunting down and switching off on the old phone. So I had to redo a lot of that, and I'll need to put my music back on it and make a new set of lockscreen pictures for it at some point - all Dracula-related, of course, just like on the old phone, but they need to be different dimensions now.

I hadn't quite got round to the camera until this evening, but I realised when I began thinking about it that I had an excellent opportunity to test out its supposedly-excellent low light settings. Just over a month ago (in fact specifically on Halloween evening), there was a power-cut in Headingley, which hit around 7pm and last for about half an hour. It was fully dark outside by then, so I lit some candles to provide at least some light in my lounge, took a picture with my Samsung Galaxy G7 and tweeted it: 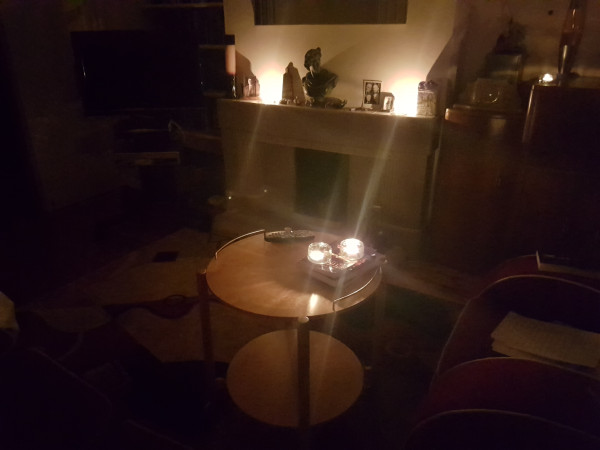 Actually, power-cuts have been a major feature of this week too, but only at work, so I didn't actually need to dig out the candles at home. But I realised that recreating the picture above, with the same conditions of five tea-lights and no other illumination, would be an excellent way to test out my new Huawei's capacities. So that's what I've just done and here is the result: 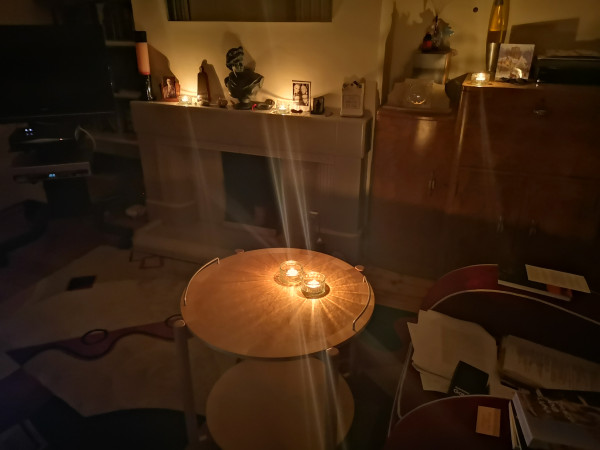 It did something quite different from the Samsung while taking the picture, announcing that it was 'processing' for about four seconds and taking what I think were actually a series of shots that allowed it to calibrate and perhaps even stitch together the best overall picture by using different lenses and settings on different parts of the scene. Anyway, whatever it did, the results clearly are in a different world from the Samsung equivalent. Much better colour balance between the candles themselves and their surroundings so that they don't just look like balls of white light, and then much better colour and detail on things like the round table-top, the carpet, the items on the mantelpiece, the chair and the cupboard behind.

Oh, and meanwhile the battery is currently sitting on 56%, whereas by this time on a similar day I would have expected my old S7 to be plugged in getting a second charge. So apart from accidentally supporting China's efforts to destabilise the west (whoops!), I guess I'm pretty happy. Definitely looking forward to seeing what else the camera can do at least.