This is one of Hammer's non-horror films, shown recently on the excellent

TalkingPicsTV channel. It's a crime drama, and for Hammer was clearly a B-feature: you can tell because it is in black and white, despite them having moved definitively into colour for their horror pictures several years earlier, and according to Wikipedia the total budget for it was £37,000 (contrast £81,000 for Dracula three years earlier). It's an absolute cracker, though, with well-scripted characters masterfully acted by Peter Cushing, André Morell and the like, and a beautifully-paced plot which keeps you guessing right up to the end. I sort of watched it with

lady_lugosi1313, although not quite in the usual way of being present in the same room together. She was in her house and I was in mine, but as we both knew the other was watching it we exchanged texts as we went along, marvelling at the wondrous talents of Mr Cushing and the twists and turns of the plot.

Because of those twists and turns, I'm going to put the rest of this review under a cut, just in case there is anyone out there who might wish to watch it unspoiled. I do heartily recommend doing so if you have the opportunity. But if you've already seen it or don't care about spoilers and do want to know what it's like, click on...

The film is set entirely in the Haversham branch of an ordinary high-street bank. Unless I've forgotten something it has just five sets: street in front of bank, shop front area of bank, bank manager's office, stairway down to the vaults and the vaults themselves. The bulk of the cast play staff at the bank, and character interaction at the beginning establishes the dynamics between them. Mr Fordyce, the manager (Peter Cushing) is an honourable man, but he has swallowed the rules of the organisation he works for so hard that he comes across as cold and strict towards his staff, treating a minor irregularity which was clearly accidental with a headmaster's severity and intimating that it might be a firing offence. His staff, meanwhile, are an ordinary bunch - fallible, very apologetic about the error, but generally cheerful and clearly well bonded with one another. There's a mix of older and younger, male and female, but no-one is a demographic stereotype. My absolute favourite moment at this stage in the film was the older lady, Miss Pringle, translating for her younger female colleague the silent mime involving a variety of dance-movements which her prospective young man is acting out for her across the office: "My dear, he's asking you if you're a hep-cat or a square!"

It's two days before Christmas. A man dressed as Santa is ringing a bell and collecting for charity outside the bank's front entrance, and Miss Pringle has what Mr Fordyce considers an excessively vulgar display of Christmas cards on her desk. He is about to learn some of Scrooge's lessons about the importance of treating his staff with kindness and humanity, but not from a series of ghosts - from André Morell. Morell's character, going by the name of Colonel Gore-Hepburn from head office, and supposedly there to inspect the branch's security arrangements, is in fact a con-man, but we only learn this slowly and even when we do for a long time Mr Fordyce is the only character within the story who understands what is going on. Soon after the two men have settled down in the manager's office, Mr Fordyce falling over himself to impress his prestigious visitor, the telephone on his desk rings. Crackling down the line are the voices of his wife and child, clearly terrified and begging him to do everything Gore-Hepburn says, and the latter coldly proceeds to explain that his men are holding them hostage and will pass raw electrical currents straight through their brains if he doesn't cooperate in emptying out the bank's vaults into four suitcases which Gore-Hepburn has brought along for the purpose.

This is where Peter Cushing really gets the chance to shine in the role. He is absolutely perfect as the straight-laced bank manager faced with this terrifying threat which forces him to break the protocols that clearly mean almost as much to him as his family. He doesn't overplay it, but his little mannerisms tell us everything we need to know about his inner fear and turmoil: dabbing nervously at his upper lip with a handkerchief as he takes in the full ramifications of Gore-Hepburn's plan; missing the phone cradle when he goes to replace the receiver after summoning in a member of staff; hands shaking as he holds the glass of whisky which Gore-Hepburn has coerced him into pouring. He even tries bravely to subvert Gore-Hepburn's designs by pretending that his small, local branch has far less money in its vaults than he is expecting, but Gore-Hepburn has done too much research to be fooled. Fordyce has no choice but to play along every step of the way. Their two faces say it all here, I think, even in a still picture: 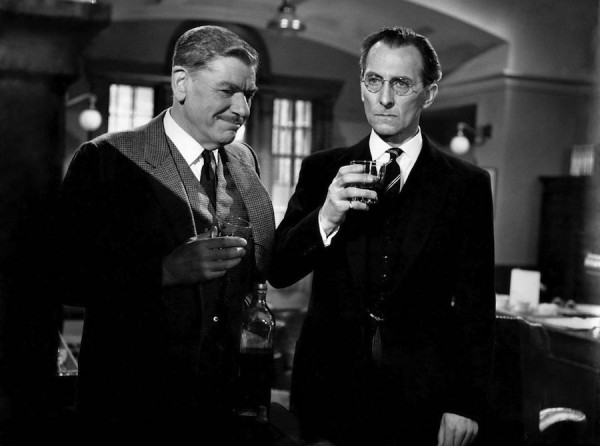 His staff are initially oblivious, happily following Fordyce's (as we see) now-brittle instructions to fulfil Gore-Hepburn's requests. But they do eventually remember that they are supposed to phone head office to check the identity of visiting representatives, just as a matter of procedure. After some lovely dramatic tension while they wait for a line, give up for a bit and finally have one more go and get through, they learn the truth and call the police. But by that time Gore-Hepburn has already departed, and before the police arrive a horrified Fordyce has already persuaded his staff to join him in convincing them that it was all a mistake and everything's fine after all. This because he believes that one of Gore-Hepburn's associates is still watching the bank, and will give the orders to kill his wife and child instantly if he sees any sign of the police giving chase. It's here, when Fordyce has to beg the colleagues over whom he has always placed himself so aloof to help him deceive the police for the sake of his wife and child's lives that his character-arc really culminates and his values are utterly re-defined. And they do help him, because they are human and they understand his position.

Morell meanwhile has been pitch-perfect all along as Gore-Hepburn, with just the right breezy authority to convince in his supposed persona of the Colonel, but also enough of the ruthless bully and the chancer about him to convince as the crim he really is. As I often do with films of this type which he isn't actually in, I performed the thought experiment of wondering whether or not Christopher Lee could have carried off the role, and for me the answer was no - he couldn't have bridged the spectrum of twinkly-eyed charm, easy authority and underlying brutality anything like as effectively. Gore-Hepburn brings along all twelve volumes of Edward Gibbon's Decline and Fall in his suitcases, to weigh them down so that Fordyce's staff won't become suspicious when carrying them out again full of money, and I choose to see that as Significant - after all, if the weight alone were the point he could just as well have brought the Encyclopedia Britannica. Perhaps it says something about Peter Cushing's world-view, in which authority rests entirely on rules and regulations, crumbling in the face of assault from Gore-Hepburn's barbarian roguery?

In a final twist, just as Fordyce is relaxing in the belief that he has successfully rebuffed the police and thus saved his wife and child, they turn up back in his office with Gore-Hepburn in hand-cuffs, and start accusing Fordyce of colluding with him - which of course he did, though under duress. I wondered for a moment whether they were even really the police at all, or perhaps some of Gore-Hepburn's rival crims, given that they insisted on taking away all the money with them as 'evidence'. But according to

lady_lugosi1313 Fordyce and his staff evidently recognised and knew at least one of the police officers when they first called by (in a moment I'd missed), so I guess not. Another theory I considered for a while was that Gore-Hepburn would turn out really to be from head office after all, and to have been testing how Fordyce's loyalty to the company would stand up in the face of an extreme threat - a test in which case, of course, he would have utterly failed. But no - that would also be to put the film on the side of corporations and money rather than families and humanity, and it stayed firmly with the latter in keeping with its Christmas spirit. So they were really the police after all, and perhaps for no particularly good reason other than in service of a happy ending, Gore-Hepburn casually explained to them how he had used a tape imitating Fordyce's wife and child to force him into cooperating. In the final, final twist, then, they had never really been in danger after all - but at least poor old Mr Fordyce wasn't going to spend Christmas in jail.

All in all, a thoroughly good evening's watch, and a strong reminder that there are still many Hammer gems awaiting me, both within the horror genre and without.