This is a Romanian film about the historical Dracula, which tells the story of his main reign from taking the Wallachian throne in 1456 to his arrest on the orders of Matthias Corvinus in 1462. It isn't legally available to buy in the UK, so I watched it on Youtube (complete with English subtitles), partly to see if it would help me in my current efforts to learn Romanian, and partly of course for its own sake as a portrayal of Dracula.

On the language-learning front, it wasn't a great deal of help, mainly because I just haven't learnt enough yet to be able to pick up new words or constructions from context, but perhaps also partly because the sound-quality on the Youtube video is pretty poor, making everything sound a bit distant and unclear. I'd say I was able to recognise something like about one word in a hundred, which obviously wouldn't get me very far in a real-life situation! But hopefully I will at least have tuned in to the rhythms and structures of Romanian just a little bit while watching it, and maybe if I come back to it shortly before actually going there, I will find by then that I can get more out of it.

On the portrayal-of-Dracula front, though, it was absolutely fascinating. It is, of course, a product of Communist Romania, released right in the middle of Ceaușescu's time in power, and ( Collapse )

That's not to say it isn't also ( Collapse )

There was one scene which really jarred for me from a political / moral perspective, though, while not needing to be there at all from a historical one. This concerned the story from the pamphlets about ( Collapse )

I also noticed that ( Collapse )

Despite such reservations, though, I really liked the film as a piece of drama. The story is dramatically plausible, following a satisfying narrative arc from Dracula's noble aims at the start of the film to his tragic downfall at the end. And its star, Stefan Sileanu in the title role, is absolutely excellent. He really inhabits the part, endowing it with all the intensity, self-belief and sense of purpose which really have to be there for Dracula's actions to come across as convincing, but also showing us the moments of vulnerability and despair which also have to be there for him to appear human. I particularly enjoyed a scene in which some of his enemies fled into an Orthodox church for sanctuary, but Dracula ordered them to be dragged out and punished anyway, leading to a crackling set-piece between him and the priest about the rights and wrongs of what he is doing. Furthermore, he has fantastic eyebrows, wears excellent hats throughout (nicely modelled on the historical portraits), and looks good on a throne or a horse: 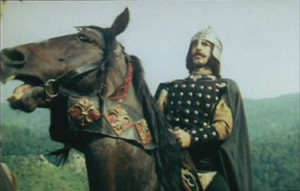 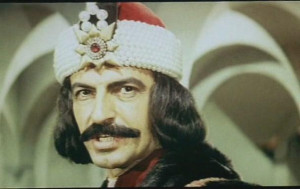 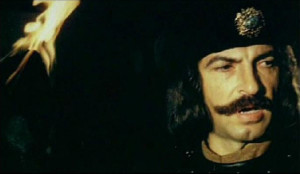 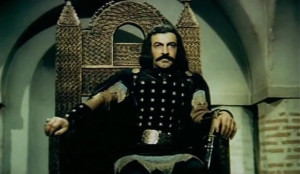 That said, if you weren't super-into the history, I suspect the 2hr15m running time and Romanian-language soundtrack would be off-putting. For me right now, though, it was great!

Click here if you would like view this entry in light text on a dark background.
Collapse