I did watch The Snowmen on Christmas Day, and will rewatch and review that in good time. But I have another catch-up review to do first: The Angels Take Manhattan, which I likewise saw at the time but never got round to reviewing because work was so busy and even my watching had slipped about two weeks behind schedule by the time it was broadcast. Time to put that right.

I felt that this was a story which made a lot of emotional sense in the way that it dealt with Amy and Rory's relationship with each other, and with the Doctor, and with the close of that story. It also put forward some interesting models for the way that Doctor Who deals with time, had a delicious meta-referentiality to it, and made good use of symbolism and locations. It is completely fair to say, though, as some reviewers did at the time, that the central idea of the Angels' 'farm' at Winter Quay ( Collapse )

That aside, though, the rest of the story was great. I ( Collapse )

Other, smaller details about this episode which I liked included things like the very effective shots of New York statuary early on to establish the right atmosphere for the story, Amy's smart-specs, and the name of Julius Grayle - definitely spelt that way, as we saw it written out on The Dying Detective's typewriter, but with a nice aural pun on 'Grail' that is very appropriate for a collector of rare and impossible things. Best of all in my book, though, was another inscription, visible over the door of the Winter Quay building when the 1930s detective first enters it in the pre-credit sequence: 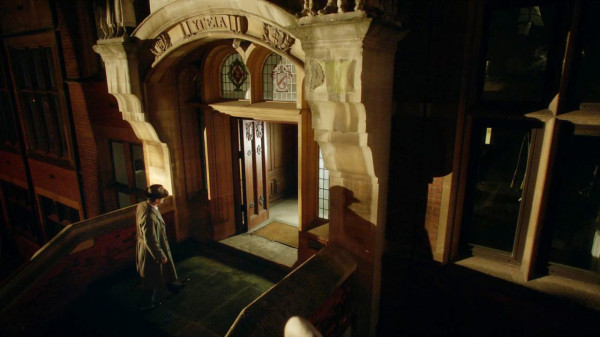 It is in Greek lettering, and reads ΥΓΕΙΑ - i.e. Hygeia, daughter of Aesculapius and goddess of health. As far as I could see it was a genuine inscription on the building, not a prop, probably suggesting that the exterior location used for the Winter Quay building was originally a hospital. But its clear placement within the shot shows that the production team knew full well what it meant, had chosen this building for that reason and were making the most of it within the story. It is, after all, a source of life and health for the Angels.

We also get yet another reference to light-bulbs - a thread which has been going all season and is yet to be resolved - when River asks whether the bulb on top of the TARDIS needs changing. And, talking of the TARDIS, I noticed a shift in established canon regarding its the effects of its translation circuits. River tells Rory that he can read the inscriptions on Chinese vases in 1938, even though the Doctor and the TARDIS are both in 2012(?ish?) because it is a gift of the TARDIS which hangs around. This certainly wasn't the case in The Christmas Invasion, when Rose and Mickey, who had both already travelled in the TARDIS, could not understand the Sycorax while the TARDIS was out of action because the Doctor was still busy regenerating properly. But it does at least now explain how on Earth Nefertiti and Riddell could understand one another after they had left the TARDIS and shacked up together at the end of Dinosaurs on a Spaceship.

Time to rewatch The Snowmen now, I think. :-)

Click here if you would like view this entry in light text on a dark background.
Collapse